The rocket racing enthusiast Fritz von Opel was certain of building a rocket motorcycle with which he intended to set a new absolute motorcycle world speed record in Freiberg.

Since early summer of 1928 the first Opel Moto Club of motorcycles had been founded, so Opel decided on a 500cc Neander SS (Super Sport) model as the basis of his proposed Raketen Motorrad (rocket motorcycle). With a strong 22 hp OHV (Overhead Valve) one cylinder motor Opel intended to accelerate the vehicle up to approximately 120 km/h (75 mph). Then, the six powder rockets attached to the rear fender (3 mounted on each side) with a combined total of 30 kg (66 lb) of thrust would gradually ignite with the help of a foot lever mechanism.

However, the record attempt did not take place as planned. The German authorities forbid the speed attempt of the rocket motorcycle for safety reasons, so that Opel only got to do some rehearsing and demonstration tests. The successes of Opel’s four-wheeled rocket racing cars as well as a his light RAK-1 rocket plane ends the entireRaketen Motorrad project in 1929, when Opel withdraws himself from the project.

The Opel Neander motorcycle, however, still sold in Germany for a few years while rocket cycle racing continued with the Opel Moto Club under Otto Luhrs. 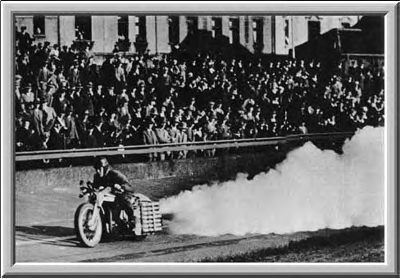