Because it had a diesel engine, it saw only rear-echelon use with the Heer, but both the Kriegsmarine and Luftwaffe, which had other diesel engines, used a number of them. The unfortunate alternative use of the Mercedes 260D has a very dark side to its history. It was the car of choice for the dreaded Gestapo and SS. As Jens Mehner put it, “I would call the 260D a thug's car since that is a name those leather-coat-clad sub-humans deserve...”

In the 1920s, the main attraction of the diesel engine was strictly limited to its economic value. But the constant noise of operation, the vibrations, and the limited power of the initial engine performance made the success of the first diesel trucks very minimal. At the beginning of the 1930s, however, the German engineers were still trying to solve the problems of diesel reliability. The rate of compression and the higher constraints of the diesel engines forced the Germans to oversize the block rolls, the crankshaft and the pistons compared to a gasoline engine of equal cubic capacity. The German engineers could not, however, increase the number of revolutions of the engine without the inertia of these massive parts harming the longevity of the engine.

Back in 1926, Daimler-Benz equipped its trucks with one diesel six cylinders whose maximum operation reached 1,300 rpm against 1,000 rpm for a four cylinder diesel. It was at that time impossible to go beyond. The Germans needed the addition of Mahle reduced pistons, and Bosch injection pumps to reach 2,000 rpm, then 2,800 rpm with 82 hp by 1933. By then, the frame of a light passenger car could not yet withstand the vibrations emitted by these large engines.

By November 1934, Mercedes engineers thus decided to confine further diesel development around a four-cylinder motor. They managed to reduce the vibrations by redesigning the combustion chambers and improved the engine output by laying out the valves at the head. The result was a diesel engine which developed 45 hp with an operation of 3,200 rpm, while consuming only 9.5 l/100 km (against 13 l/100 km for the standard 4 cylinder gasoline engines of the time).

Consequently, it could be installed in the frame of a Mercedes 200 taxi. The thousands of kilometers traveled by 1935 soon proved the value of usage, solidity, and the reliability of this diesel enough to arouse the interest of private individuals.

The following year, Mercedes decided to answer this new demand by presenting a passenger version, baptized 260D in reference to the cubic capacity.

In 1936, the French vehicle manufacturers Peugeot and Citroen proposed similar light diesel vehicles, but only utility versions and taxis. But on the French side, a passenger diesel would not be available until 1938 with the Peugeot 402.

Mercedes soon profited from the range of bodies planned for the basic frame with 6 cylinders, including two convertibles. Nearly 2,000 vehicles would be assembled until 1940, the priority date on which the Daimler-Benz group had to devote itself entirely to military manufacture.

The SS and Gestapo made excellent use of these vehicles for more sinister purposes - the hunting of Jews. If one saw the 260D coming, trouble was to be expected. The Mercedes 260D ultimately became associated as an infamous “Death Mobile” instead of known as the first diesel passenger car. 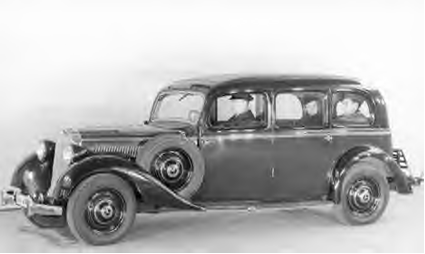